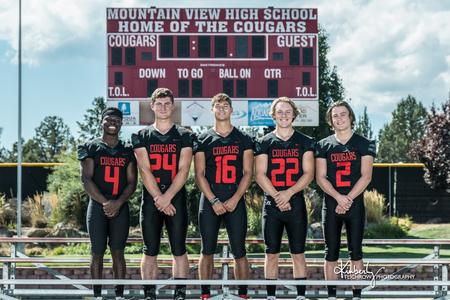 Max will be an important part of the Cougar ground game.  A returning letterman at  running back and linebacker, he has been working hard in the off season to solidify his spot at tailback in 2022.  Max would like to thank his mother Andrea and father TJ for always being supportive and honest throughout his football career, and his brother Sam for always competing with him, driving Max to be a better player. He would also like to thank Rob Hill for putting in time and effort to help him become a better athlete, even when he didn’t have to. After high school he wants to earn a bachelor’s degree in automotive technology.

Nick is a three-year letterman and two-year starter at fullback and linebacker for the Cougars.  His experience, and leadership will be a key for our success this season. Nick would like to thank all of his family and friends, especially his mom Terri and dad Greg for the support and pushing him to do his absolute best in everything he does. Outside of sports Nick enjoys motor-cross, backcountry snowmobiling, and being in the outdoors. After high school he plans on attending college at Oregon State University and starting his own construction company.

Colton has been playing football for 8 years and it his favorite sport. As a linebacker and receiver, he continues to get better and better being one of our better blitzers and more physical players. He also participates in track and baseball, wrestling, and soccer. He plans to go to college after high school but is not sure what he will pursue.

Greyson is playing his 7th year of football, having started both offense and defense since he started playing.  Greyson also competes in track. In his free time he likes to go to the gym, snowboard, golf and play basketball. He plans to pursue football at the collegiate level.

​Ben enters his senior season as a four-year member of the Cougar football program.  On defense, Ben will be one of the top cornerbacks in the league after having a great offseason on the 7-7 on circuit.   Ben started at corner last year, and will be one of our team leaders on the defensive side of the ball.  Ben had limited carries at running back last year, but looks to get more touches this season.  Ben has a great vision and speed, and looks to be a gamebreaker for the vaunted Cougars rushing attack.  After high school, Ben hopes to continue his football career at the collegiate level.

Elliot is a Cougar through and through with his late Grandfather Paul coaching and teaching  at MV and his father and uncle playing here.  He will be working through shoulder surgery for the first part of the season but has been rehabbing.  He is a dedicated wrestler and wants to pursue welding after high school.